It used to happen all the time back in my Oddbins days; people used to come in asking if we stocked the amazing [insert wine X] that they had on holiday. The chances are we wouldn't stock it, but every now and again we did, although people would occasionally come back having drank the bottle they bought from us suggesting something had been lost from the wine. All of a sudden on a grim day back in the UK some of the lustre just wasn't there. 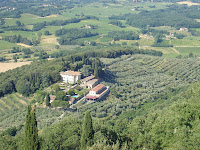 The photo on the right is of the wine estate where my wife and I got married. I've not tried the wine since, but I'm reasonably sure it won't taste as good in Nottingham as it did in the Tuscan sun.

In my current role 'Wine X' has been replaced by Edradour in that it seems to be the holiday maker's whisky. If you do a quick Google image search it's not hard to see why paying the distillery a visit would leave you with some fond memories. A look at the reviews on The Whisky Exchange and you'll understand what I mean; many of them are about the distillery rather than the whisky. It's interesting that what sticks in people's minds when I ask them about it is that it is Scotland's smallest distillery, especially since it isn't any more!* I remember having tried Edradour a few years ago, having had quite a few customers at the shop I was working in at the time say how much they'd enjoyed it (and the distillery visit) and I wasn't overly excited about it. Not good, not bad (in my experience single malt rarely is) but just... OK.

As I've suggested before, I think that taste is always affected by the circumstances of the tasting. Given a different situation a 'real ale' reviewer can find himself extolling the virtues of a beer most Camra stalwarts would avoid as being one of the very beers they exist to campaign against, were it on tap at their local instead of Heineken etc. It's probably stating the obvious, but objectivity is a really difficult thing. Think about whether you'd prefer good beer in a truly horrible pub, or average beer in a pleasant pub atmosphere? While the beer's quality is not intrinsically affected by the surroundings it sure as hell affects you, the drinker. Even if you are reviewing a bottle from in front of your monitor at home, the type of day you've had has to affect how you feel about whatever it is you are drinking.

If all this sounds a little superior then I apologise, it's just a few thoughts as to why I am re-trying a whisky I've had before and not been that fussed about. I don't live my life in a bubble any more than the next person, and so I am not claiming to be any closer to objectivity than the next person. Indeed, the very fact that I've written several paragraphs of pre-amble before getting stuck into the stuff suggests I'm not, but I'm going to have a try anyway! If you've lasted this long then I hope you'll bear with me. 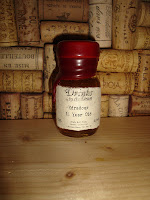 This is their 'entry level' malt. On the nose there's a honey note and a waft of something more floral. The palate is creamy and it flirts with a nutty sherry note but doesn't really come through, almost announcing itself then disappearing. The finish is ashy and bitter, almost astringent. It's definitely not my cup of tea, but even aside from my not finding it particularly to my taste I don't really understand why it is such a sought after whisky. I'm not a huge fan of Ardbeg and Laphroaig, but I can see their appeal, this, I'm not so sure. That said, they're a small enough operation to be flexible, and if some of the other expressions are different I can see why visitors might well be seduced.

Maybe what I really need to appreciate this is a trip up to the Highlands? If anyone wants to help a donation (or a volunteer to drive) would be gratefully accepted. However don't be surprised if a slight diversion leads to some Blair Athol 12yo Flora & Fauna being picked up while I'm in the area - rumour has it that it might not be around for much longer.

Sample bottles are available from Master of Malt for £3.91.