I'm a Talisker fan. As I've mentioned before it was one of the whiskies that first got me into single malts. It's billed by their parent company as a 'Classic' malt and unlike some from that range it's hard to argue; it's a desert island drinks cabinet dram. 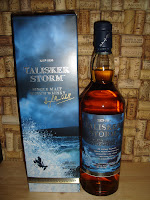 But what about this? There's a faint whiff of the 'if it ain't broke' surrounding it from the off. Is this another 'No age statement' whisky concealing 'No Aged Stock' issues? According to the publicity material it has 'the distillery’s signature sweet warmth and briny, peppery finish with a “deeper intensity”.' That's not a million miles away from how I'd describe the 57° North, kind of Talisker PLUS, and indeed There's a bit of a telling quote in the '1001 Whiskies...

It's been compared to looking out to sea with a storm brewing.


That's the 57° North of course, definitely not the Storm; that would be silly... Moving on. The 'Storm' sits in a different price bracket to the 57°, rather closer to the regular (at the risk of labouring the point) age statemented, 10 year old. Here's the Label detail:

An intense Talisker with a profoundly maritime character, like a warm welcome from a wild Hebridean sea.


I can see the sense in both sides of the current discussion of age statements. If the whisky is good enough then so what? But if provenance wasn't important then labelling single malt as such wouldn't be important either. Would people pay the same for this whisky, on its release, as they would if it were tea-spooned and couldn't be called Talisker?  Of course they wouldn't, and I suppose that while the point about taste remains valid, it wouldn't take much for an awful lot of trust, or brand loyalty, call it what you will, to disappear in waft of briny peat-smoke. It will certainly be interesting to see how this whisky is received, along with the new Macallan and Highland Park offerings, not to mention Diageo's new Caol Ila and Johnnie Walker expressions - none of which carry age statements. It's a cheeky thought, but if there was a stock issue I'm betting there's some people out there will be more than happy that others will snap this and the other 'new Taliskers' up if it eases the pressure on the ten year old and keeps it widely available.

Anyway, enough theorising, on to the whisky. I tried it alongside the regular Talisker to compare the two.

Colour-wise it's a fraction paler than the regular T10, On the nose I got characteristic briny and smoky notes, some fresh fruit; lemon perhaps, and white pepper. There is a definite youthfulness to it, it's bright and breezy rather than brooding, but it's not hugely different to the regular bottling. On the palate I got more of that citrus tang, along with cinnamon-spiced apple crumble and a lingering chilli heat. It's definitely more fruity than the standard bottling, and it integrates nicely with the smokiness. There's an ashy dry finish which contrasts well with the sweeter lemony palate.

In conclusion, I'd say if you want to go with a bigger bruiser of a Talisker, then don't be fooled into thinking this is the one to go for - you've just got to stump up the cash for the 57° North. Does that reflect badly on this one? I don't think so. I found it most enjoyable, and I'm sure most Talisker fans will enjoy it too, even if it doesn't end up being the expression they'd take to the desert island.
Posted by Gareth at 20:28