Back in early 2005 I started working for Oddbins, the once mighty high street wine retailer.* Remember high street wine retailers? They used to exist before the supermarkets took an interest in wine and squeezed them out, and were a great way for people like me with no castle/expansive cellar/butler to learn about wine. Anyway, plenty has been written on the subject and I'm not here to gripe about the unfairness of it all. 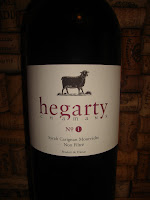 Hegarty Chamans, as I've mentioned before, was a favourite of the then assistant manager of the first Oddbins I worked in, a guy who taught me an awful lot about wine in the best way possible - drinking it with me. All this time later and I'm through four levels of wine qualifications, and I'm now officially allowed to put letters after my name to, as my mate put it, 'tell people I know things about alcohol.' This seemed an ideal wine to celebrate going from being a bright-eyed and bushy-tailed wine adviser (sort of) who knew absolutely nothing about wine to bagging myself a WSET diploma; which means I now know how little I really know.

Apart from all the sentimentality this is a lovely wine, I really like the rustic, herby Southern French style, they're a real demonstration of how you can get depth of flavour without over-ripening or a reliance on pure power. On the nose there's lots of red and black currant, and on the palate it's got a lovely herbal olive tapenade flavour.. Velvet-smooth nearly a decade after the vintage.

I paid £9.99 for this one back in 2005, which really was a bargain at the time. A more recent vintage is currently available in the UK through Adnams for £15.99.

* To give them their dues, Oddbins seem to be doing all right for themselves down south, albeiit on a smaller scale from when I started. Beer selection to be applauded too, according to London types on Twitter (Matt, drinking Rocky Head Pale Ale and London Fields Brewery Black Frost Stout to be precise).