I had a couple of decent beers the other evening. One I picked up recently from the newly opened Flipping Good Beer Shop, and another I'd had stashed in the cellar for a few months and came across it while I was having a bit of a sort out (if you horde beer/wine/whisky like I do you know exactly what I mean.) 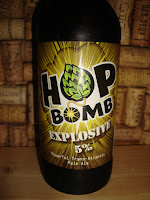 First up was the Sadler's Hop Bomb. I probably served it a bit cold, because there wasn't much on the nose at first, maybe a touch of elderflower but if I'm really honest, it didn't hang around long enough to warm up and allow me to savour the aromas - it's far too quaffable for that! It's 5% abv; strong I suppose, if you like your beer at a more 'sessionable' strength, but quite low for a modern IPA and I thought it was all the better for that; it's less about the sweet tropical fruit than vibrant fresh apricot and white grape flavours, all leading to a gentle sherbet finish rather than harsh bitterness.
5% abv. £2.65 (33cl) from The Flipping Good Beer Shop. 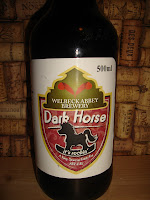 The other was the Welbeck Abbey Brewery Dark Horse, not one that is part of their core range - I think I'm right in saying it's a seasonal/experimental brew from earlier in the year.
There's lots of well-done toast on the nose along with a touch of red and dark fruit. On the palate it is plummy and rich, but keeps its balance rather than descending into a heaviness that its 4.8% abv couldn't support. There's marmite flavours and a lovely sweet hint that comes through on the finish. It would be a hard one to put into a style category - is it a dark ale, a hoppy mild or a lighter Black IPA? When it tastes this good, I for one don't really care!
4.8% abv. £2.60 (50cl) from Hops in a Bottle.
Posted by Gareth at 12:01