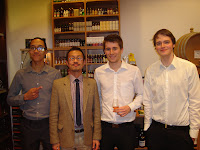 I thought I'd put the tasting notes as a separate blog post for those who are interested rather than run it in with the (probably far more interesting) things that I actually got told by Tatsuya, the man who really knows his stuff!

On the nose I found it very floral, with vanilla, butterscotch and a touch of caramel. Others suggested tinned pineapple too. Once you taste the whisky the cedar and sandalwood aromas really envelop you, it's got a dry, oaky bite at the sides of the tongue and lashings of sweet allspice. If it is the Japanese Oak that gives it the floral notes and the bite you can see why they have to use it sparingly or it would become overpowering.

On the nose it's got more noticeable bourbon cask notes, lots of coconut and green fruit; under-ripe melon and granny-smith apple peel. It does have some of Hakushu's heavily peated whisky in the blend, but at such a low level that I struggled to pick it up, - more Bunnahabhain than Bruichladdich even - although it does add to that complexity in an ethereal sort of way.

This seemed to be more familiar to me as someone who is used to (and a fan of) big sherried scotch. There's an almost kirsch-like note to the nose, it's big and rich with lots of fudge and dried fruit. On the palate that familiar sandalwood note comes through once you pass the sherry hit, and there's a lovely subtle powdery chocolate finish. It's clearly the big brother to the 12, trying them alongside one another revealed the same Mizunara bite.

Light on the nose, I got fresh ginger and honey. The palate provoked a rather prolonged discussion about Pez sweets - not an easy thing to explain to someone who'd never heard of them, but it seemed to fit the profile.

On the nose I got marzipan and tropical fruit. It's not as big and rich as the Yamazaki 18, but it does have a high malt content and is very much a luxurious blend. The grain content seems to give it a touch of vanilla which complements the marmalade and what Tatsuru described as 'Belgian Waffle ' flavours; syrup and honey. After we'd tasted this one Tatsuru told us that this it is the 12 year old blend that is a newer addition to the range, and it doesn't sit as nicely alongside its big brother as the Yamazaki 12 does alongside the 18. Not to say that they are not both good whiskies, but they are almost too different to carry the same name - in order to give the 12 more complexity they use plum liqueur casks to finish the whisky, which they don't need to do with the elder statesman.

I'm not sure these whiskies are necessarily for everyone, but I don't think that's necessarily a bad thing. There is such a trend towards big, bold flavours that sometimes it's nice to see subtlety given pride of place. 'Mild, delicate, sweet and elegant.' Indeed, and thanks again.

All available from The Whisky Shop generally and here in Nottingham! Shameless work plug, but if they weren't available at the shop I work in then I wouldn't have got the chance to try them!
Posted by Gareth at 17:07