I love winter; long evenings staying cosy in the house with a good film, a good beer and a good whisky. Ideally I'd go for an imperial stout with a whisky to match, but Adnams' idea of a Winter IPA sounds like a rather excellent concept too. When I worked in a London Oddbins next to a video shop we used to try and come up with wine and film combinations, asking people what film they'd rented and trying to recommend an ideal wine. I might branch out and try for a triple combination, the ultimate whisky and film accompaniment to a beer - I'm sure I can put the research in for this one. 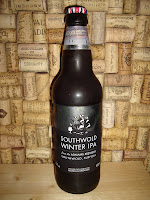 Back to the beer. It poured cloudy, I'm not sure if that was my fault but I'm rarely particularly picky about clarity. I loved the brilliant orange colour though. There's a slight soapiness on the nose, but it was potentially a bit cold when I first poured it - a good film beer has to last the length of a film after all. There was plenty of rindy-orange flavours, like mixed peel, and a spicy, perfumed finish. All good, but for me a little understated. I'd love to try a more powerfully-hopped version!

There was a bit of a danger of expecting too much from this one, as my little self-indulgent opening paragraph suggests. It is, after all, a beer brewed for a supermarket chain so is it fair to expect something so different as I had in mind? Perhaps, but thinking more objectively this is a great beer for the money, and it might well lead to more adventurous offerings in the future. A beer like this with a more powerful spice kick like the Otley O-Garden would be fantastic. The whisky was a SMWS Glen Moray and the film was Se7en. Good for a starter but as the nights really draw in I'll be looking for my whisky to have more sherry, smoke or even chocolate orange flavours - like the Ben Nevis from the Glenkeir range - Christmas in a glass.*