I'm not really a massive wheat beer fan. Schneider-weisse is an old favourite but too many I've had have had too little flavour to really capture my interest. However, I've wanted to try some of Otley's beers for ages, and so I picked this up when I saw it, the choice being this or the porter. Well, or isn't strictly true, as I'm sure most beer geeks can appreciate. I took both. 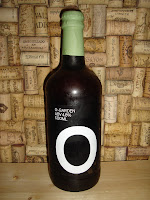 So a brewery I'd heard many great things about making a style of beer that usually leaves me pretty non-plussed - which would win out? This was a beer of two halves really, on first pouring it was clear, and the aromas gently came out, caressing the nose rather than delivering a full on assault. On the palate? Well, earlier on in the day I'd had a sample of a fifteen year old Ben Nevis whisky, which had a beautiful tangy yet sweet orange flavour. When I tried this, it was like the whisky had come back to haunt me. When I poured the second half of the beer the sediment came out more, and as it warmed those initially subtle aromas really came to the fore. The fruit provides enough character to keep the beer interesting, without it ending up like some sort of sickly fruit beer. The whole package is deliciously mouth-watering, and the touch of spice in the finish invites you back for more. It was a revelation, the best wheat beer I remember having tried. If this is what Otley can do with a beer style I'm not particularly a fan of, I'm definitely going to have to get hold of some more!