This was my beer for the 'Open It' weekend. Although I've not really had it that long, there's not much that I've had much longer either. I have wine going back to the days I first started in Oddbins down in London, but I tend to buy beer to drink (revolutionary concept there eh?). I am fascinated by the ageing process though, and I keep meaning to get some beers cellared for a longer time. I'm sure I'll get round to it at some point! 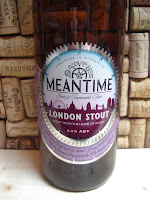 There's lots of coffee on the nose. On the palate more of the fruit notes come through, lots of damson and dark cherry. These fruit flavours work really well with the medium body, which provides just enough weight to give the beer some structure, but is light enough to showcase those fruits. Those fruits also provide a good counterpoint to the bitterness of the coffee and contribute to the gentle finish. All in all a most enjoyable beer. Rich and complex and perhaps importantly, without too much alcohol, meaning  it's mellow, but not to the point where you feel like a bit of a doze after you've finished it. Enjoyed both this and the Vienna style lager they make so I look forward to trying more Meantime beers.

Nothing really to do with the beer, but since I wrote this the earworm has had me listening to Helmet's In the Meantime. nI had my last ever illegal (well, under-age anyway) pint at a gig where theses guys were supporting Ministry. No idea what it was, but damn sure it wasn't as good as the Meantime beer, although the gig was well worth the long trans-Pennine trip to Manchester. My cure for the earworm? Listen to the tune, so here it is...

You wouldn't have been able to do that in the nineties eh? Open to suggestions for a beer match for that one.
Posted by Gareth at 09:34