I'm rarely one to miss an excuse to drink beer, and this porter pancake syrup recipe from Mug of St. Arnold (also on Twitter) gave me an excuse to not only open a beer I was looking forward to, but to play around with a bit of it in the kitchen and eat pancakes! 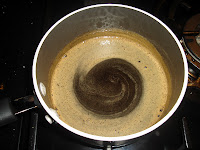 Once I'd fathomed out the crazy American measurements (why on earth sugar is measured in a fluid quantity I'll never know) and converted them into good old fashioned bushels, away I went. This is my sort of cooking. It involves very little skill, and beer. 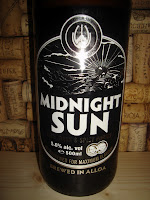 The beer I went for was Williams Brothers' Midnight Sun Porter. It smelled gorgeous when it was heating up, looking a bit like the molasses at the Bundaberg Rum distillery that I remember from my Queensland days - although slightly more appetising! The syrup thickened slightly on cooling, and still had plenty of boozy quality to it (maybe a 5.6% beer was a bit excessive for the exercise but I'm not complaining) and the cinnamon complemented the original spiciness of the porter which came out a lot because of the heat. 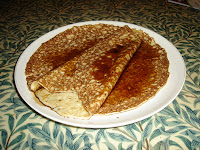 The result was that the syrup was a lot better than the pancakes. We got some delivered with a load of food by mistake so we got them for free - ready made pancakes that is - and they were worth every penny. Frankly I should have just bothered myself breaking a few eggs open - live and learn. Still, the syrup was a resounding success. I may have gone a bit mad with my first helping but my wife went back for seconds and thirds, and the remainder (and there was some even though I halved the measurements, the recipe does make a lot) is destined for ice cream later on today.

As for the beer au naturelle, well, it's a modern porter and it's definitely up to the Williams Brothers' usual high standard. There's plenty of body and bitter coffee malt to back up the rich, spicy dark fruit flavours on the palate and bitter chocolate notes on the finish. Once it was in the syrup all of those fruits became like liquid mince pie filling.

I got this one from Gauntleys in Nottingham. Not sure what I paid for it but a quick search had it at £1.89 from Beers of Europe. At this price it's a bargain for a 50cl bottle, given what you'd probably pay for a comparable American beer.
Posted by Gareth at 12:06