Yesterday was Yorkshire Day, so a bit of a rummage round the cellar unearthed a couple of appropriate beers, and the Saltaire 'Triple Chocoholic' was voted in by my other half as the one to celebrate with. It was perhaps inevitable that we'd compare it to the Meantime Chocolate Porter that we had last week. 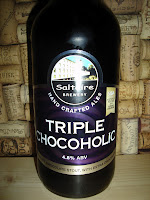 For starters this seems to be far less of a 'beer for people who don't like beer.' (See Pintsized Ticker's experiment here.) The nose was dominated by the chocolate malt, despite being only 12% of the malts involved, but it was the aromas that reminded me very much of nosing the chocolate malt at the Gwaun Valley Brewery the other week that stood out - it was in one of the jars pictured. On the palate the chocolate definitely comes through but it doesn't have the viscous texture of the Meantime that leaves it being a lot more 'beery' rather than a more indulgent 'dessert in a bottle' style. If this sounds negative then I don't mean it to be, I think that the two beers, despite obvious similarities, are very different. The Saltaire uses chocolate to complement the beer rather than being the be all and end all of it; the bitterness of the hops is still there and the power of the malt means there's cocoa and biscuity qualities that add another layer of complexity. The name Triple Chocoholic, to me, does suggest something more of a chocolate overload than the beer delivered, and while I don't think that is necessarily a bad thing in terms of making a beer I wonder whether some people might be disappointed.

PS. A reminder it's IPA day today. Hope you've got your hop-bombs in for the occasion! Potential menu includes Durham Bombay 106, BrewDog Never Mind the Anabolics or Moor Illusion. Nice decisions to make.
Posted by Gareth at 12:47