Peelander is a completely new brewery on me. This triple was a present from my brother and my sister-in-law who were over from The Netherlands to visit recently. Given where the beer is from I think they probably got it when they were down in Zeeland - my sister-in-law's mum lives down there and so they probably picked it up while visiting. 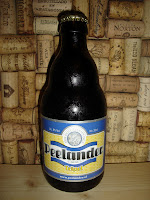 Having left it to stand for quite a while it initially poured clear. Once I'd got to the bottom there was some yeast sediment. It's a light gold colour with a good fluffy head. The nose is dominated by citrus fruit, mainly lemon, and with a touch of spice. This is reflected on the palate where there's loads of tangy apple, juicy citrus and pine flavour that really gets your mouth watering. It doesn't have the dustiness that I associate with its near neighbours over the Belgian border, although it does have a lingering, yeasty finish. Overall I thought this was an excellent beer, lots of character, as you'd expect from a triple, but really fresh, accessible and probably quite dangerously moreish considering the alcohol content!