I popped into BrewDog in Nottingham the other day because I fancied trying this one, and it seemed appropriate enough for a second IPA day beer. If you have a high enough tolerance for BrewDog's publicity antics and you haven't seen the things they did for their 'Olympic' beer it's over here. Me? I like IPA, and given an opportunity to try a new one I'm always up for it, and that's unlikely to be changed by how little or much noise the brewery make. 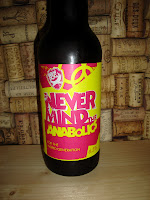 I wasn't entirely sure what to expect given the claims about 'controversial' additives. It pours a lovely coppery red colour. |On the nose there's pine and an earthy, herbal note, presumably from the ginseng. On the palate here's plenty of juicy tropical and citrus fruit hops as you'd expect from a BrewDog IPA, but overall I just wasn't that impressed. It's decent enough, but not that exciting or different.

The acid test of these things is usually the question of would I buy it again? Well, I don't think I would. I don't think it's really that much better than BrewDog's staple Punk IPA, assuming it's on form - I have heard there are some issues, to justify the extra money.