I don't think I had any involvement in IPA Day last year, it was a bit early in my blogging days so I probably wasn't aware of it in all the hubub. Anyway, here I am celebrating my first IPA Day. A day to celebrate what is probably my favourite style of beer. What's not to like? 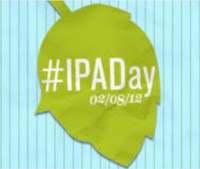 First up was a beer I've been looking forward to trying for ages. Much as I like the American styles of IPA it's British IPAs that are my first love from way back, and in the wake of British performances in the Olympics which have actually stopped my usual cynicism in its tracks it seemed doubly appropriate. As far as I'm aware Durham Brewery (admirably in my opinion) won't sell their beers through supermarkets, so this isn't something you're going to find outside of specialists or on-line. Look out for their #sourpower day to celebrate the release of the really exciting sounding Diabolus that's happening on the 6th of September. 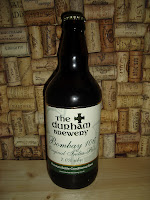 Enough pre-amble, on with the beer. It's bottle conditioned and leapt out of the bottle after opening so it didn't pour very clear, although I just about managed to miss my phone and hit the glass with only minor spillage! Crisis averted I dived right in. It was well worth the wait, a really excellent, unashamedly bitter beer. None of your new world tropical fruit in this one; there's some lemon and grapefruit on the nose but it's just luring you into a false sense of security before the steely metallic flavour on the palate hits you with everything it has. Short, sharp and definitely to the point. The finish is crisp, the mineral hop hit doesn't hang around long enough to get unpleasant, rapidly moving on to spices; pepper that urges you to try more.

Obviously IPA Day deserved more than one IPA, but the Bombay deserved its own post. A superb beer; BrewDog's 'Olympic Beer' will have to wait.