Sometimes it seems a shame that there is not much of a voice for lager. There's much clamour about cask ale and American style craft beer, and even to people not familiar with either they are obviously different - they often look different, and the bolder flavours can make them taste very different too. 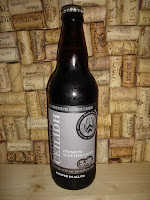 I thought Williams Ceilidh was a great beer, but lager, more than any other style, might well be lost amongst the vast number of beers on the market. Lost once in the sea of mediocrity that is mainstream lager, passed over by cask-orientated pubs that might well not be able to sell interesting lager if it comes in a keg (the chances are that keg lines are tied up to 'must stock' beers.)* It might even be overlooked a third time by those amongst us that love big flavours, the hop-heads and the flavour explorers (and I'm not claiming innocence in this!)

It did get entered in this year's SIBA Craft beer in Keg competition, where it won a gold. I hope that's a good sign for the future. Who else is going to stand up for a well-made, flavourful, domestically brewed lager? On pouring it doesn't look much different to most lagers. There's plenty of body, a citrus hoppiness that's subtle rather than being an IPA punch, a gorgeous satisfying biscuity-malt sweetness and a fresh lemony-citrus finish. Now all we need is some summer sun to get outside and drink it in.

* I've not blogged in a while, mainly because I've been busy, but partly because I've drank nothing that inspired me to write. Changing to lager from more traditional beers (that some would have us believe are the only ones worth drinking) was what got me going again.
Posted by Gareth at 08:48