Friday evening, and I thought I'd do a chilli-themed Transatlantic Taste Test. Two quite different beers, with a chilli link. The first is from the Cave Creek brewery in Mexico and the second from Fallen Angel down in Sussex. The theory was that I could get to taste the beer once the initial shock of the chilli spiciness wore off.

Cave Creek Chili Beer is billed as a premium lager with a quite a big, not particularly scary looking chili added. It's a golden colour, the head collapsing almost immediately on pouring. Once the bottle's open the chilli provides a surface for the Carbon Dioxide to be released, so it bubbles away in there (a bit like a floating etched logo). The aromas are all green chilli and the taste, unsurprisingly, reflects that. Although it's a lager it didn't taste a great deal different to the Fallen Angel Fire in the Hole that I reviewed back in October. After the chilli heat had worn off (well, sort of) and I began to taste the beer underneath it seemed to be a pretty standard, sweetish adjunct lager, certainly nothing spectacular (unless you like your beer to have that distinctive sweetcorn taste).

According to this video (thanks to Carl for pointing this out) you are supposed to eat the chilli. I did, and it didn't taste of anything. I'm not sure if that confirms my suspicion that it wasn't a particularly spicy chilli in the first place, or if it had been there long enough for all the flavour to go into the beer.

Next up was the Fallen Angel Black Death. This one's a bottle conditioned stout, Camra sticker and all, so I was expecting something quite different, and perhaps a bit more serious. However, given it's made with Naga chillis with a Scoville rating of 850, 000 I thought the spice might take a bit of getting through! If I remember rightly the Fire In The Hole (its little brother) suggests drinking it in shots. I didn't.

From an initial sniffing it was easier to get some roasted malt and coffee aromas from the Black Death - as you'd expect from a stout - although there was loads of green chilli the beer underneath was much more obvious than in the Cave Creek. Again it poured dead flat. Once I'd allowed my palate to adjust (hammered it with chilli) some sourness came through along with another, bigger, chilli hit.

Overall I remain unconvinced. I love chillis, but I think that the reason beer is so great with spicy food is that it provides a contrast, and when the beer you want to quaff to complement the chilli high just adds to the high it doesn't quite work. I'm not sure that these aren't just novelty beers, to be consumed at student parties and the like, so maybe actually taking a bit of time to taste them isn't what they had in mind. Still, here's to someone brewing the world's first Chilli Gueuze! 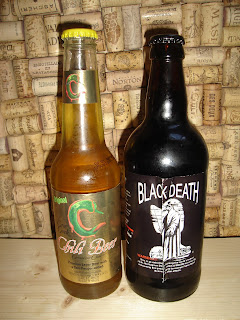