Is it the water? The weather keeping them indoors? Whatever it is that keeps the Scots making great beer and the world's finest whisky (a 16yo sherry-cask Glen Scotia provided an ideal accompaniment to this) I hope it continues for a long time - at very least until I shuffle off this mortal coil anyway. Harviestoun are currently vying with Williams in terms of being my personal favourite Scottish brewery. My review of their Wild Hop IPA* has been gobbled up with the loss of my old blog but I thought it was one of the best beers in Sainsbury's Great British Beer Hunt, along with the Williams Bros' entries (see here for Simon's review over at at CAMRGB).  Even years of working for Scottish and Newcastle wasn't enough to scare me off beers from north of the border (used to be a big fan of this on hand-pull). I've heard vague rumours that there's a brewery up near Fraserburgh somewhere, but they seem to keep really quiet. If it were me I'd try and get some more PR, get in the press and stuff, but what do I know? 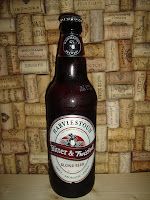 So, the beer. If you've ever had a home made lemon cheesecake, with ginger nut biscuits mixed in with the digestives to make up the base, then you already know what this beer tastes like without trying it. It's got a great balance of biscuity malt and tangy citrus hops, and all at a very reasonable session strength. Much as I hate supermarkets, it does instill bit on confidence in the future of British Brewing when they're prepared to stock proper, decent beer like this. All right, it's not shouty, and it's probably not as exciting as the latest must-have hop-bomb from across the pond, but like I say, it's a proper beer. Job done.

On a side note, I'd had a few days off the beer before trying this, and I love how alive your palate gets after a few days rest. Even if the rest of your body is tired beer's great for invigorating the mind and the soul. Although I'm sure you knew that or you probably wouldn't be reading this.

Tempting as it was to put Therapy?'s Potato Junkie as a music match (don't click on that if you're easily offended) my favourite electronic artist has a tune called Bitter and Twisted so it'd be rude not to post it. (Hat-tip as ever to Mark for beer and music matching!)

* Is this still about? It's not on their website.