A few weeks ago I did a review of three of the Innis & Gunn range. Despite (or maybe because of) my not being that impressed by the range, Katherine from I & G got in touch to find out if I'd like to try their whiskey cask aged stout. I agreed, hence what would be an otherwise very short blog post. 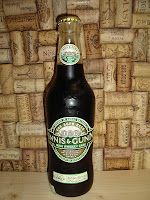 There's plenty of roasted malt and coffee and on the palate. It's got a bit more body than the others, without actually being full-bodied, which I think marries it all the better with the whiskey flavours, and makes it rather moreish. There's a light, lifted, almost minty note to it (I realise that sounds revolting but it works - I don't mean mint flavour but more the sensation). Irish whiskey is generally towards the lighter, zestier end of the scale, and I think that works quite well with a stout that, while strong at 7.4%, isn't up there with the likes of the big Imperial Stouts on the richness front. There is a hint of the estery banana flavour on the finish that characterised the others in the range but on the whole I think this is a much better beer than the other three that I tried. The toffee and treacle don't dominate the original character of the beer, and so it retains its balance of bitter malt and sweetness.

Many thanks to Katherine and Innis and Gunn for trying to convert me! Since the issue of feedback has sprung up over a few blog posts this week (See Nate, B&B and Jenny's blogs) it's good to see that breweries do look at some reviews in the constructive way that they are meant. In the interests of full disclosure I should probably point out that I wasn't asked to review the beer, merely if I fancied trying it.