A few weeks ago I was reviewing several beers whilst trying to get my head around how beer could work in conjunction with oak. One of the best of these was Ola Dubh, a version of Harviestoun's Old Engine Oil porter aged in Highland Park whisky casks. It's great to have a bit of continuity with blog posts so it was good to get the chance to try the inspiration for the Ola Dubh, courtesy of Harviestoun, even if I did it in rather the wrong order.* As a bonus, I also got sent the special edition 'Engineer's Reserve' version of the Old Engine Oil , so I thought I'd give them a try in tandem. 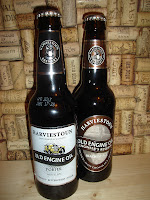 First up, the original. It pours a gorgeous black, with a crema-coloured head. There are lactic notes on the nose, along with bitter chocolate and coffee, but it's really on the palate that it comes to life. It has a lovely way of moving between coffee-bitterness and a treacle-like sweetness and back again. It's full-bodied with a luxuriously sensuous mouthfeel, like melting chocolate. There's a long, lingering smoky bitterness in the finish.

The reserve is, unsurprisingly, similar, but with everything turned up a notch - for want of a better description it's kind of an 'Imperial' version of the original. The chocolate is more noticeable, it's got even more body, and the balance shifts more towards the sweetness. I got more of the spices, demerara sugar, vanilla and burnt malt than the original, and less of the dried fruit. Considering it's half as strong again as the original, it wears its alcohol really well. 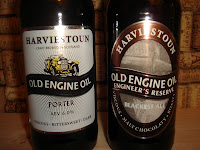 Of the two, for me the original pipped the reserve to the post, although it was a close run thing (my wife preferred the reserve). If nothing else it reinforces my opinion that it's richer beers that are better candidates for oak ageing. These are certainly rich beers.

Beers of Europe retail the Old Engine Oil at £1.75 (330ml, 6.0% abv) but I'm not sure of  a price on the Engineer's Reserve (9% abv), it doesn't seem to be widely available. Thank you very much to the folks at Harviestoun for giving me the chance to try these beers, they were very much appreciated!

Edit: I've been told the Engineer's Reserve is a US exclusive, hence there being no price information for the UK.

* In the interests of 'research,' next time I order some beer I'm going to have to get myself more Ola Dubh for comparative purposes - a sacrifice I'm most definitely prepared to make.
Posted by Gareth at 12:40