Back in my pub-management days we used to have La Chouffe on tap fairly regularly, and despite it being a whole lot more pricey than the usual beers we had on draught it always used to go pretty quickly. The consumption was also helped along by some very keen staff and their rigorous attention to quality control by way of constant tasting. 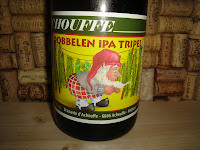 As a result of this beer's stable-mate being such an old favourite I was a little worried I might not like this one, it being labelled up as a double IPA, albeit in a hybrid with a tripel form, I thought it might just end up being a one-dimensional hop-monster. My worries were unfounded.

It pours with a slight haze. On the nose there's light citrus; lemon and a hint of pine. It starts light and almost sherberty and then the floral hops kick in on the mid-palate, I love the way the hops sort of sneak up on you as you drink it. For such a strong beer it comes across as really light and refreshing - dangerously drinkable. There's a crisp clean finish that also contributes to its moreish nature. All in all it's pretty spectacular, I really enjoyed it.