I've really been enjoying some understated hop-driven offerings recently; beers like the Great Newsome Pricky Back Otchan and the newest of Gwaun Valley's beers, the Bitter Ale. I don't mean spectacularly, in-your-face hoppy like the Jackhammer I had in BrewDog Nottingham the other night, which was great, but hardly the most sophisticated of beers. These are beers where the flavours are that bit more difficult to pin down, potentially all the better for that if you're enjoying a quiet contemplative bottle at home rather than a pint down the pub, where sometimes you want the flavours to leap up at you so you can get on with your conversation. 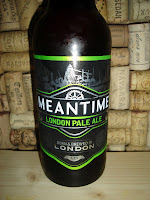 The Meantime London Pale Ale definitely fits into this category. I'm not sure if it's a traditonal or a modern beer. It's bitter, but it's not a brown bitter. It's pale ale, in the original sense of 'not dark' but it didn't really have the feel of either an American pale ale, or a more traditional Burton ale. I'm even conflicted as to whether it's a good thing that these beers are popping up in some supermarkets. Maybe I should just concentrate on enjoying it? There's plenty to enjoy after all. Lot of juicy, zesty, citrus fruit to back up that mown-hay bitterness and malty texture. (4.3%. £1.65 for a 33cl bottle in Sainsbury's)


Briefly returning to BrewDog. I also had a schooner of Libertine; the new black IPA that's going in as part of their core range. Despite problems I've heard from various sources about erratic Punk IPA quality and continued problems with their supply chain, BrewDog are still doing something right at least - this really is a superb beer. One cheeky query though. A brewer I know would like to know if it's BrewDog who've bought up all the Simcoe hops? If it's Simcoe that's responsible for the Libertine then can you please share? I for one would like to see more of this sort of thing!