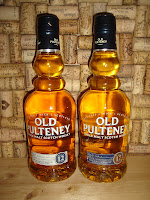 Old Pulteney 12 is a whisky I've never been that bothered about. A former colleague of mine used to like it so I did give it a try years ago through work but it didn't leave much of an impression. When I tried it again more recently I have to say the earth once again resolutely failed to move for me. Nothing wrong with it, just not particularly my thing... Then I got to try the Old Pulteney 21. This is one that Jim Murray gave Scotch of the year to in his 2012 bible, and while I often disagree entirely with his assessments, this time he and I were on the same wavelength - it's great; subtle yet superbly complex. So that left me with the 17 of the (affordable) core range to have a go at, the casting vote. I wasn't really bold enough to leap in and buy the 17 though, after all it might be more like its younger sibling than its older, and so I've bagged a set of two halves, which gives me a chance to re-assess the 12 year old that's also rated highly by Jim Murray, putting him in the illustrious company of at least one ex-Oddbins manager (I'm sure he's honoured). The other consideration was that while a quick tasting sample is a great way of introduction to a whisky, unless you get to spend time with it in comfort and quiet contemplation I think you can never really get to know it. Maybe the introductory expression would reward some care and attention.

On the nose there's a whiff of the fairground, as if you're carrying a great big candy floss and you wander past a toffee apple stand. It really benefited from sitting for a while and opening up, which is something that I'm finding helps as I'm trying to get into more subtle whiskies like this (not all the time though, clearly). On the palate there's lots of fresh, vibrant fruit, pomegranate and banana in particular, at the fore. It's only really the finish that I feel lets it down, there's just not much more than a tease of salt and ginger then it's gone. There's also a certain brackish feel to it along the sides of the tongue that I'm not really too keen on. Other than that I'm really glad I've given the 12 a chance, it's definitely moved on from how I remember it being; all brine and not enough flavour to back it up.

This expression uses second refill bourbon casks rather than the first refill ones used for the 12, the idea being that that the longer maturation doesn't end up in a spirit that's been overpowered by the wood. Once again there's fruit on the nose but this time it's mellower, like apple crumble, and there's a fuller barley aroma and more secondary notes of vanilla and fudge. On the palate there's still a tangy salty note only this time there's more going on so it doesn't dominate so much as in the 12. It's on the finish that it really leaps ahead of its younger sibling though, the finish is great; complex rich sweetness with none of the brackish notes I've always found with the 12. An altogether more rounded dram.

Just as a final note on the 21. I was asked recently what the best luxury whisky I've tried this year is and despite brilliant indy bottlings of of The Macallan and Imperial which I was really impressed with, I think I'd have to go for the Old Pulteney 21 on the grounds that the sheer complexity of it meant that every mouthful threw a whole new batch of amazing flavours at you. There might be more to come on that one if I feel I can do it justice.
Posted by Gareth at 20:17