This is one of two independent bottlings of Clynelish that I've got at the moment, both at 15 years old. I've always thought that Clynelish is one of the most under-rated whiskies from Diageo's stable, despite its 'Classic Malt' status. It's strange that Dalwhinnie overshadows it when Clynelish seems so much more of a genuine Highlander (at least in terms of flavour profile, I guess there's no competition in terms of altitude!) Still, if it being under-rated means that the indy bottlers get more of it then that's fine by me. 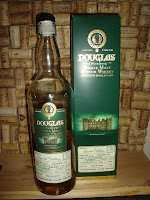 Apologies for my photo which surprisingly manages to be even worse than my usual efforts. Despite appearances I hadn't drank half the bottle when I took it though, me and a mate are doing a whisky-share, going halves on bottles after a somewhat protracted decision-making process. It means that two of us contribute to the tasting note - more of a text-tasting than a tweet-tasting.

On to the whisky... On the nose there's almond/marzipan and candied citrus peel. On the palate it's fresh and grassy and there's woody spice (ginger) and tobacco. Additional notes (via SMS) suggested marmalade, lemon, wood, cherries and burnt citrus. With a drop of water (this is a 50% abv whisky and I thought it came across a bit spirity on the nose because of that) the sweeter spice notes came more to the fore. This is a good, proper Highland dram; not shy, but certainly not too shouty - long may Clynelish's profile remain firmly at the level it is!
Posted by Gareth at 19:57