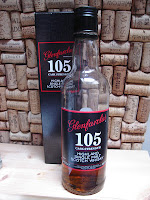 A while back I was musing as to why I hadn't ever got round to trying this one. I then got to try it at a tasting and, at the risk of spoiling the surprise, it was every bit as good as I thought it might be, so I went halves with a friend on a half bottle to enjoy at my leisure.*

My photo doesn't do it any justice at all, although it's probably not helped by divvying up half the contents. It's a deeply polished mahogany colour, as intriguing as the oloroso sherry barrels that so heavily influence it. On the nose there's a fair kick from the alcohol but get past that and you're into familiar boozy raisin and sultana territory. On the palate it's almost clichéd 'liquid Christmas cake' but really, who cares when it does it so well? It's like slating Barcelona for 'just scoring more goals than the opposition'. It doesn't half deliver, a sort of 'go direct to sherried whisky, do not pass go, do not collect £200'.  It has plenty of weight, but its youth (it's 10 years old) means it also keeps vibrant rather than wallowing in the sherry. Whilst I'd be intrigued to try the (4 times more expensive) 20 year old version I've no idea if that could carry it off as well.

I've tried a few of the regular Glenfarclas range now, and for me this one and the 2003 Whisky Shop exclusive represent the best of the range in terms of bang for your buck. Highly recommended!

* I admit my enjoyment is not really a surprise, its appearance in this blog doing more than suggest I enjoyed it!