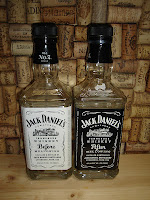 Anyway, a couple of samples were left for me to try to demonstrate development of Jack Daniel's whiskey through its famous charcoal mellowing process. Jack Daniel's all goes through '10 feet of hard sugar maple charcoal' before maturing in barrels and becoming whiskey.

These two are not quite new-make JD since it's cut down to 40%, and I'd imagine it's not matured at that strength. In Scotland the industry standard is 63.5% abv. In the USA whiskey is introduced to the cask at no higher than 125 proof (62.5% abv, see here) but as I understand it in practice it does go into casks at a lower strength than that, but not as low as 40%. Buffalo Trace, for example, generally introduce their wheated bourbons to cask at 57%/114 (American) Proof, something they've recently experimented with to make sure it's the optimium level.

I should also add that this is not a commercial release, it's not for sale at all and clearly states so on the bottle. The commercial release of these 'not whisky yet' whiskies is something I struggle to make my mind up about. I'm all in favour of things coming out that help us all to understand what we drink but when I see 50cl (ie. a sizeable amount of spirit) for more than bottles of decent quality single malt then something doesn't quite sit right. But that's for another post I think; there are some interesting thoughts on commercial releases of 'new-make' spirit over at the Edinburgh Whisky Blog.

Now I wouldn't really describe myself as a Jack fan, but in terms of readily available whiskies around the world, I'd say it's up there. I'd certainly take it over a cheap blended Scotch or for that matter an Indian 'whisky' which is, well, nothing of the sort. So what do these two taste like?

The first impression is that it's kind of like you've walked into a sweet shop, there's a load of sweet corn there with a dusting of icing sugar and sugared water - you may get the impression I'm going with a sweet theme here on the nose. On the palate there's not much going on, some oily sweetness and some patisserie baked notes,but it comes across a bit like a rather directionless vodka. There's no finish to speak of unless a vague (and not particularly pleasant) lingering of the sweet corn flavours count. I know some people use these sort of raw spirits as a cocktail ingredient and I suppose it could work like that, it's really not meant to be a drink as such so it's unfair to suggest that it should be one - it's certainly not unpleasant just rather forgettable!

At first on the nose it's not hugely different, and if anything it's even more so, but I've run out of sweet metaphors so feel free to fill in your own. It seemed slightly more viscous in the glass, and once it had opened up the harsher sweet corn notes are not so pronounced as in the first sample. On the palate it's immediately more like whiskey, I think it's a bit of an exaggeration to suggest that  'it is absent the grainy character of the white-labelled before-mellowing whiskey,'* it is Jack Daniels's after all, but it certainly pulls the flavours together more, and comes across as much smoother, even if it does add another layer of sweetness!

All in all it was interesting to try these two samples, you can certainly see that the mellowing does have an effect, although part of me does wonder if that extra sweetness might be at least as appealing as the smoothness.