75cl bottles of beer, a truly fantastic idea. They're great for sharing, and in the case of both the Punk IPA I had the other week (which I am pleased to say was back in tip-top form) and this one, they're even better to share with someone who wasn't that keen and so let me drink it. 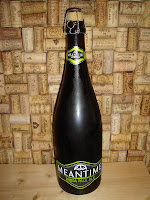 For me Meantime brewery are ticking all the boxes. They're making good, well-packaged beer, which is widely available. I love reading about the weird, the wonderful, the eye-wateringly expensive, and the hard-to-find, but unfortunately that's often as close as I get. However it's reassuring to know that even in those monuments to mediocrity, the British supermarkets; decent, flavourful beer is getting a look in.

The IPA pours a coppery-orange colour. On the nose the Meantime IPA's fruit was restrained at first; grassy nuances of tropical and citrus fruit were there, but I served it pretty cold which I think subdued things a little. The punch came on the palate in the form of an explosion of pithy bitterness. For me some IPA can end up with so much forward tropical fruit that they end up being a bit cloying, more like pop than beer - or maybe Um Bongo? This has far more complexity, the biscuity malt doesn't just feel like an afterthought, although taking away some of the sweetness does seem to make it moreish and disguise the alcohol. Ah well, that's what Friday evenings in front of the rugby are for.