This one comes from a brewery that I am familiar with from my pub days; one of Broughton's ales, The Ghillie, used to pop up occasionally as a guest beer. 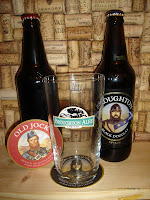 I got sent this from the brewery by virtue of being pretty quick on cutting and pasting questions and answers for their 'Tuesday Trivia.' I claim no kind of expertise or talent for having won, so I'd say if you can get on Twitter and on a keyboard of a Tuesday Broughton (@BroughtonAles) are well worth a follow to get yourself all sorts of goodies, as you can see from the picture. The Dark Dunter is the bottle on the left without a label - it's a new brew and not on general release in bottles as yet so it was interesting to give it a try. I came across this from the pump-clip artist - not one for the faint hearted; it may well make you sprint past a garden full of gnomes at full tilt next time you're passing one at night. I'm sure there's some back-story to this one!

While I'm a massive fan of Scottish beer in general, 'Scottish Ale' as a style, isn't really one of my favourites, so I wasn't sure what I was going to make of this one. It pours an almost impenetrable brooding dark brown. As you'd expect the malt is dominant on the nose; there's loads of prunes and sweet spices. On the palate there's dried fruit, oats and dark chocolate. Generally I find Scottish Ale a bit sweet for my liking but this stayed away from being cloying; probably benefiting from both the medium body and not being too high in alcohol (5%). It'd be a great one for a haggis supper, along with a wee drop of whisky of course.

My wife's, rather more concise, tasting note was 'Yeah, I like that a lot; it's very easy drinking.' It sounds like I'm being forgiven for winning too many pint glasses in the trivia competition. Cheers Broughton, Black Douglas to follow!