When I first started working in Oddbins I got quite into collecting wine as well as drinking it, albeit in a completely haphazard fashion. On quieter days in the shop the discussion would usually turn to the decision of what wine we were going to have after work. I generally used to hot-foot it down the hill after closing to catch the 10 O'Clock film on Film Four - back when it was a superb subscription channel - clutching a couple of bottles; one for the cellar and one for viewing accompaniment. 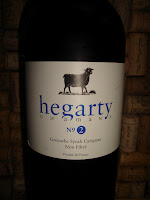 This is another that I stashed from back then. When the first of the Hegarty-Chamans wines came into the shop it was a big hit with the then Assistant Manager, and it was him that persuaded me to try them, for which I was most grateful, even a few years later.

'Cuvée 2' is an unfiltered Grenache, Syrah and Carignan blend and is decidedly Mediterranean in character; chock full of rich brambly fruit with black olives and a hint of balsamic. The balance between fruit is superbly balanced; teetering on the knife-edge of sweet fruit and savoury herbs, but all the better for having elements of both. The juicy tannins giving the wine a lovely, well-rounded texture.

This wine, or at least a younger equivalent, is available in the UK at the moment from Adnams, for £12.99. Buy at least a couple, and keep one for a few years; you won't be disappointed. They also stock the very good 'Cuvée 1.'
Posted by Gareth at 10:08