NZPA started life as a British export in the late 19th century. Although popular myths suggest that it was shipped to Lions rugby players in 1888, in fact it was more the coaching staff and press core that used to drink it at the time, the players themselves having developed a preference for a chilled glass of Marlborough Sauvignon Blanc - a local beverage very popular at the time and now, sadly, confined to the three for a tenner bin at Asda. A few ships were unfortunately wrecked on the Australian coast at the time, allowing the locals to sample the now famous beverage. This actually led to the Australians developing a deep mistrust of hop-flavours, something that is only being overcome in very recent brewing history. 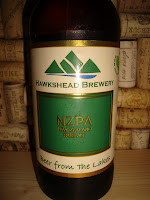 OK, so I made some made stuff up. Although by all accounts it's no worse than the rubbish peddled by Tui* with regard to their 'East India Pale Ale.' Back to the beer in hand though, this is from Hawkshead's well-hopped collection, made exclusively with New Zealand hops, and, rather like the wines do at their best, it does seem to encapsulate that vibrant Aotearoa freshness, something I'd imagine it would be more difficult to do if the beer, rather than just the hops, had come half way round the world. As you might expect it's fruity on the nose, but it also shows a certain tartness which gives it a nice contrast rather than it turning into a tropical fruit punch. On the palate it does a great job of staying the right side of crisp and clean, at no point do the fruit flavours overpower the beer; passion fruit balancing nicely with crisp green apple. Despite not being shy of exhibiting a powerful punch, it's a beer without harsh edges; drinkable and extremely tasty.

* Pronounced 'twee' as in sickeningly corny, which makes sense when you see how their advertising works.

Edit: I thought I'd add a soundtrack. A British remix of a kiwi band that the friends I met in New Zealand introduced me to. A soundtrack to summers since, despite it being winter when I was there - well it was a mild enough winter to turn the snowboarding part of the trip into a skydiving one! Motueka rocked.