If you take some white grapes, ones that would probably make a rather indifferent table wine, then you let them dry out in the sun, make a wine from the juice that's left, fortify it, and generally - in contravention of just about every other rule of wine storage/making you haven't broken yet - let it oxidise over thirty years or so, do you have any right to expect the stuff to be drinkable? 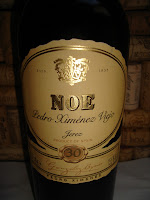 Well that's kind of what the folks at Gonzalez Byass have been up to with this superlative dessert wine. The wine itself is dark and syrupy. Unctuously sweet, viscous, treacly-brown and chock full of fig, date and raisin flavours. It was the perfect match for Christmas pudding, which of course no Christmas meal is complete without, or even just with a cheeky mince pie on boxing day.

At £15 for a half bottle it's obviously not cheap. But I think you've got to put that into some sort of context. Are there many better sherries on the market than this? I'd suggest not, and so what do you compare it to as one of the best examples of its type on the market? £15 won't buy you a lot of First Growth Claret, or Château d'Yquem, or even vintage port. All of a sudden it looks like a bit of a steal - a great treat for Christmas at least. I've already got one squirrelled away for next year.

If you're interested in discovering a bit more there's a great piece about sherry at the Wine Anorak.