A strange beer this one, even aside from the fact that I was undecided as to whether I liked it or not. A Spanish-brewed Belgian-style wheat beer, supposedly specifically developed to go with food, and with the packaging to match (It's the 75cl equivalent to dinner jacket and bow tie I reckon). It looks as you might expect from a wheat beer. It doesn't have much aroma - a slight dustiness from the wheat but not much else. 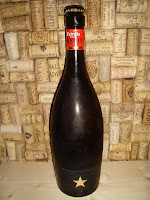 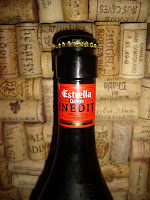 It also didn't have an awful lot of flavour, perhaps a touch of ginger, and while that could potentially be put down to the style, I'm really not sure how it can be so amazing with food - I just can't see how it wouldn't get easily overpowered. After all you can drink water with a meal - and very refreshing it is too. On the plus side it has a pleasant texture and mouth-feel, it's carbonation level is spot on. There's also a hint of sweetness in the finish that makes it easier drinking than some Belgian wheat beers, some of which I really struggle to enjoy they're so dry.

It's pleasant enough but hardly exciting. I'd give it a go if you are a fan of Belgian wheat beers, but if not, it's a pass. Here's a link to the website but be warned, it's screen-smashingly pretentious.