In the wine world there are loads of meaningless phrases bandied about that are not tied down by regulation. Some of them are actually useful in context but others less so; old vine (how old?), reserva (only legally defined in certain countries so meaningless elsewhere), cuvée (on Champagne, meaning a blend - which all Champagne is.) 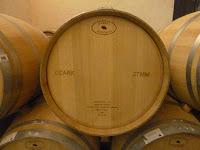 What has all this got to do with beer? Well the phrase 'oak aged,' as pops up from time to time on beer labels, strikes me as being a particularly good example. It is so vague it becomes simply another tool of the advertisers, used to infer some sort of adherence to tradition. How big is the barrel? How heavy is the toasting? How many times has it been used previously? Even the species of oak used can make a difference. The barrel on the right is from the cellars of Concha Y Toro in Chile. If you can't make out the detail it's specified as American Oak, medium toast. 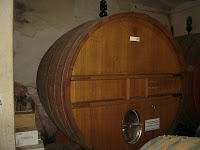 On the left is a rather different Italian botti, this one's from the Petrolo estate in Tuscany. A huge container that may well have been used time and time again, vintage after vintage, to the point where any flavours gleaned from the oak are negligible. The wine could be described as oak-aged, but equally, if a similar container were used, you could refrain from using that description and it's doubtful anyone would be the wiser.

I'm running the danger of this becoming a post about the basics of oak's influence on wine, so I'll get back to the point. If a phrase which, at first glance, might appear to be quite a useful consumer guide* can be so easily shown to be so vague, or confusing, as to be almost meaningless, then could that happen with others as they are used more and more? I can certainly think of one example where the fact that the beer comes from an oak cask is only useful as an advertising slogan.

* Somewhat ironically, un-oaked has actually become rather more useful.
Posted by Gareth at 10:32