As I mentioned before on my post for this month's session, I'm a malt fan. When I've had the money I've amassed something of a collection of the weird and (hopefully) wonderful, some of which I've drank, some of which I have lurking in the cellar. 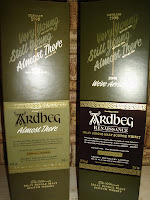 Since the discussion revolved around Ardbeg, I was reminded of a couple of things. The first was was the Lord of the Isles, which I was lucky enough to try after we'd managed to get a bottle in for a customer. To show his gratitude he brought in a sample for us to try in the shop - which was much appreciated! The other story didn't have such a happy ending, we had limited runs of Cask Strength Ardbeg 'Renaissance,' which was a ten year old bottling that was also released at three previous stages of development; the 'Very Young,' the 'Still Young' and the 'Almost There.' These being new and exciting I parted with my hard-earned £30 or so, grabbed myself some of this stuff from the shop and consumed it with relish (well, a drop of water anyway). Current price of the 'Very Young' is now a cool £325 in Royal Mile Whiskies. Still, to quote the over-quoted Tennyson poem, 'tis better to have loved and lost' etc...

I've still go two of the expressions. The question is, should I drink them? Especially since now I know they're worth more a lot more than I paid for them (looks like being about £100/bottle), I no longer have ignorance's bliss as an excuse.