Since I've neglected Whisky Wednesday for a while I thought I'd hit back with a trio of official bottlings (not that you get many unofficial ones) from Balvenie, all of which are now discontinued. 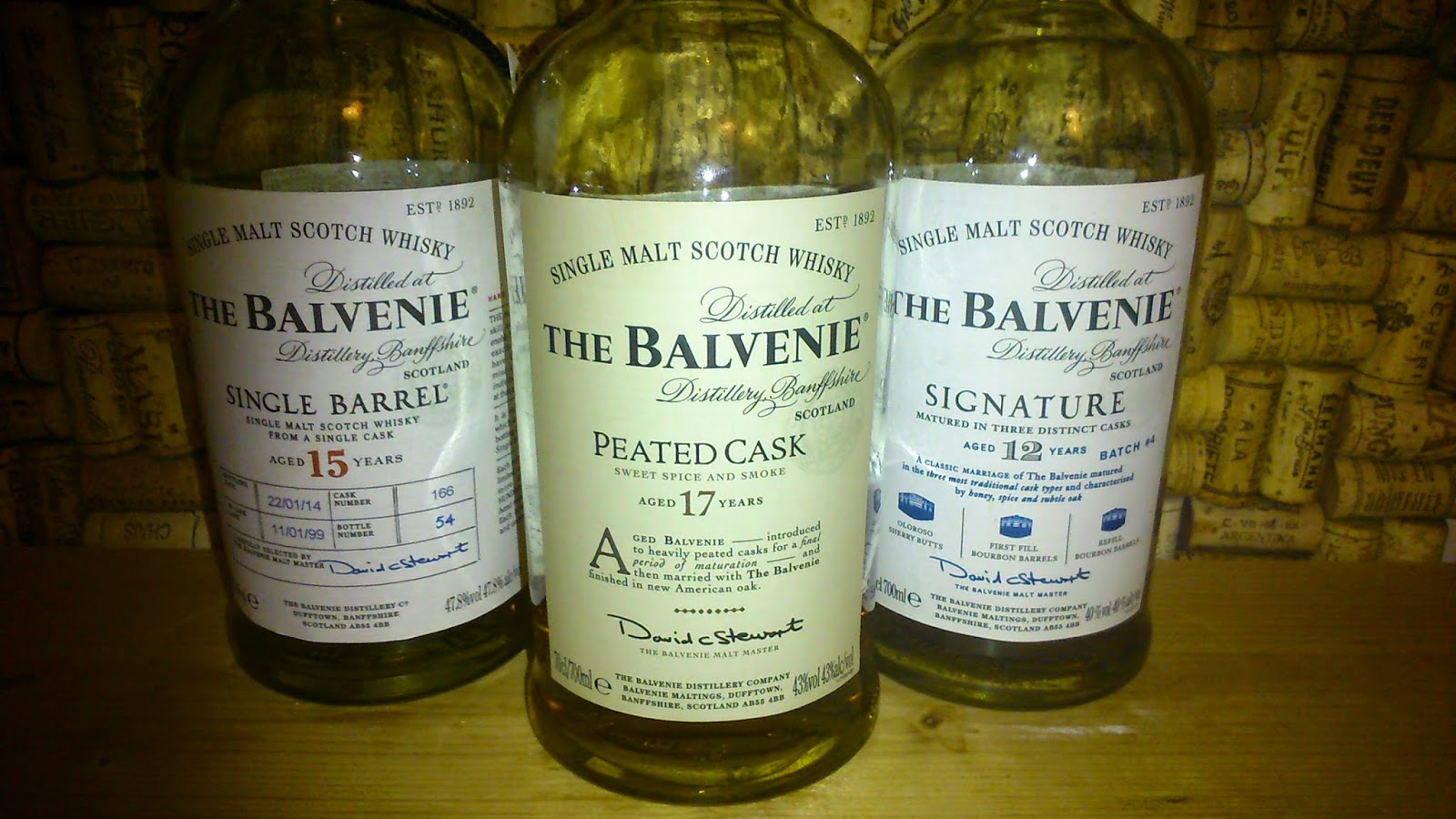 The 15 Single Barrel has a new incarnation as a Sherry cask Single Barrel, but there are still a few of the old Bourbon Cask expressions knocking about. The other two I'm not so sure, the Peated Cask is definitely getting very scarce, and there is a new Single Barrel 12 (all bourbon cask) that is roughly the replacement for the Signature in the core range.

Three casks; olorosso sherry, first fill and refill bourbon. It took a while after pouring to show its aromas; hints of vanilla and a bit of honey but somewhat reclusive! On both the nose and the palate the bourbon casks are more influential than the sherry. It's an easy-going dram, but then so is the Doublewood, which this is not as pleasant as since it seemed to have a bitter note that I've never picked up in the Doublewood. For me that bitterness is a bit off-putting. In a commercial bottling like this it's unlikely to be feints, and in a 12 year old whisky it's unlikely to be over-oaking, but there is a theory that because it's bottled at 40% the water has broken down oils leaving notes that aren't that desirable. This seems to be quite plausible although it makes me wonder why this doesn't happen in the Doublewood 12.

Just the one bourbon cask for this one, each cask producing a 350 bottle run. This really does what I expected the Signature to do, with none of that unpleasant bitterness. On the nose it's like a fresh vanilla slice (icing sugar, custard) leading to honey sweetness on the palate. It's the good elements of the previous expression but taken to a new level by getting rid of the bad. I'd say this one will be missed from the range, but having tasted the new 12 year old single barrel I think that will fill the gap nicely - as a fresh bourbon cask, easy-drinking summery whisky I think it's hard to beat at the moment. I've yet to try the new 15, but I'm looking forward to doing so. Bottled at 47.8%.

This one's genetic make-up is rather more complicated. It's not a peated whisky as such, but a non-peated whisky matured in a cask that has previously had peated whisky in it. While for previous 'peated cask' expressions they used casks that had contained Islay whisky, the casks for this were used to house a Balvenie created with peated malt from their own floor maltings. Around 60% of this whisky was made in this way and that was married with whisky from new oak casks.

Initially on the nose the peat overpowers the usual Balvenie attributes but after standing for a while the first dairy notes I got faded to be replaced by something a lot more interesting and pleasant! On the palate it really shines; it's floral, with orange blossom and incense notes combining with Balvenie's characteristic vanilla sweetness (presumable accentuated by the new oak) to balance the ashy dryness of the cask influence. This one is about as far away as you can get from being along the conventional Balvenie lines as you can get, but some of the distillery character does shine through, and it makes for one of the most challenging expressions I've tried from a distillery I enjoy, but often find their whiskies almost a bit too easy! I wonder what happened to that whisky that seasoned the casks? Bottled at 43%.
Posted by Gareth at 11:24