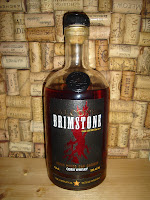 I was childishly excited about trying this one. It's always been a slight disappointment to me that peatier styles of whisky don't whisk me off my feet. I love smoked flavours in food; smoked paprika, chipotles, (admittedly not that authentic) applewood cheddar but, while I keep a bottle of something peaty on the go and occasionally dip into it if the mood takes me, peaty scotch is not really my go-to dram. I think it's the phenolic, medicinal notes that I find generally a bit overpowering. This promised something different, essentially a wood-smoked bourbon, so all of the corn sweetness and with smoke, but of an entirely different sort.

On the nose there's a load of maple-cured bacon and Frazzles (since I don't eat meat these are my occasional veggie salt/bacon overload/fix). I think the best thing about it is that fact that you expect the smoke etc. but actually it's not the whole show, there's plenty of proper serious whisky flavours in there too; vanilla, muscovado sugar and coarse-ground pepper all wrapped up in wisps of beguiling smokiness. A little water (it weighs in at a hefty 53% abv) allowed some of the more subtle, bourbon-like aspects to show through but it certainly wasn't a prerequisite.

Back in my pub-running days we used to sell Schlenkerla Rauchbier, and while it was never something I drank a lot of it was really great to have it there for when I wanted something a little different. This can proudly take its place as a whisky equivalent; dismiss it as a novelty or a gimmick at your peril, this is a proper whisky. I might even be tempted to team it up with a smoky beer for a half and half combination sometime, especially since I spied a Schlenkerla Weizen (which I've never tried) in the pub the other night!
Posted by Gareth at 19:14