This is the first chance I've had to have a go at one of BrewDog's 'IPA Is Dead' series. I think I'm right in saying that they are an annual release and I've read about them before but it wasn't until I bagged this set in York a few months back that I'd been able to get my hands on some. 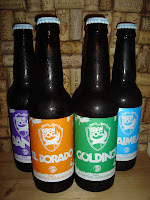 I guess the idea is simple. One beer recipe, a hop-forward one, naturally, but with four different hops used to highlight any different character they offer. While I've had a fair few single-hop beers I've not had them alongside one another so I thought I'd line them all up and go for the whole beer-geek feast and compare them - even if I did use wine tasting glasses!

The four different hops used were Dana, El Dorado, Goldings and Waimea. Rather than repeat myself they all had some characteristics in common; a dustiness that I always think of when I have Jaipur or Punk IPA.

Dana: I felt this one lacked a bit of 'zip,' not enough citrus liveliness to excite the palate like a good IPA should always do. Apologies for lurching into wine tasting terms but it felt a bit flabby, like a white wine which is lacking a little refreshing acidity. Still, very drinkable, with lots of mango fruitiness.

El Dorado: More mango, but this time a bit more citrus in the form of pink grapefruit. A bit sweet for my liking but it definitely upped the ante in terms of more IPA 'bite' than the Dana.

Goldings: More malt to the fore and all the better for it (that said, it's all relative!) Sweet blood orange and better grapefruit pithiness add up to a beer of real depth and complexity. For me the best of the bunch.

Waimea: An extra helping of the 'dusty' nose, but with peaches this time on the palate. Possibly the most balanced of the four, but it did make me wonder if balance is really what you look for in an American-style IPA, isn't it all about the hops?

All in all a really enjoyable set of beers and given the chance I'll certainly give the next lot a go. Funnily enough the last single-hopped beer I remember having was an El Dorado but as someone who really knows shamefully little about brewing I could see why the Goldings hops get used so often!

If anyone else tried these let me know what you thought -  if you did a blog post on them post a link!
Posted by Gareth at 20:57