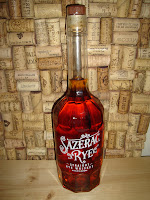 This Sazerac Rye Whiskey, along with quite a few that got delivered to The Whisky Shop at the time, is from the sprawling 149 acre Buffalo Trace distillery. I don't really have a problem with distilleries making lots of different whiskies under different names but sometimes I am a little suspicious as to motives. It happens a lot less under the aegis of single malt whisky, which I think is one of its big appeals, although there are plenty of distilleries that many might think are completely independent of one another which are in fact owned by one parent company. Given the recent takeover of United Spirits Diageo must now own half of Scotland, but at the other end of the scale the provenance of whiskies such as these that are once again being sold under the name Glen Marnoch at Aldi is something of a mystery. Given this situation it's interesting to have a read of this blog post which attempts to detail ownership of American distilleries and brand names.

Back to Buffalo Trace though, and I don't think provenance is an issue, although finding information about other whiskies than the flagship brand is somewhat frustrating. It was fascinating to have a chat today with one of their company ambassadors, Chris Hoy, who was both knowledgeable and forthcoming about how their different whiskies are made - to the point where he was giving out A4 size glossy brochures that go into quite some detail about how each of four different recipes of 'White Dog' become known as first one whiskey and then another as they go through the ageing process, in almost exactly the same way as a scotch from one distillery ends up bottled as a 10, 12 or whatever age. The Sazerac that I bought the other week is the first of the rye expressions, aged for 8-12 years. This makes it the baby brother of Jim Murray's 2013 whisky of the year; the Thomas H Handy - selected from casks at 12-15 years.

As you'd expect from a whisky matured in Kentucky's heat, even at a relatively youthful (in scotch terms)  8-12 years it's got a lot of character from the barrel - there's lots of vanilla oakiness and spice on the nose, along with demerara sugar. On the palate I got cloves and coffee and the finish has burnt toast and a sour kick that tempers that sweetness of the toffee on the palate, giving it dusty cocoa notes. All in all a great introduction to a whole new style of whisky for me, and one I fully intend to re-visit.

Many thanks to Chris for some great reading and research material, and even better conversation. I will hopefully get a more Bourbon-focussed Buffalo Trace post up if I get a chance to try more when I'm not quite so tied up with work.

I should have done this before but I've been a bit busy. In the piece above I suggested the Sazerac whiskies were older than they actually are. This was because of some incorrect information in the brochure I got - see the 'distillery matrix below.

On checking the technical specifications for the Thomas H Handy I realised it's a lot younger than I had been lead to believe. It's six years old, as is the 'Baby Saz.' Thanks to Florin below for pointing out the error. 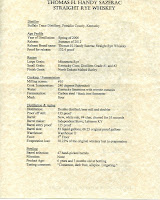