This week we were treated to a visit from Gordon Dundas, the European Brand Ambassador for Morrison Bowmore Distillers, owners of Auchentoshan, Glen Garioch and, unsurprisingly, Bowmore distilleries. This meant that Gordon was armed with quite a formidable array of very different whiskies to entertain the thirsty masses of Nottingham. 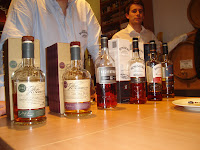 First up was a pair of offerings from Glen Garioch, the 12 year old and a '95 vintage. The Highlands covers a wide range of styles, making it rather different to pin down. Is there really a genuine Highland style when the soft sweetness and fresh fruit of Glengoyne is bracketed in with the pepper, power and peat of Talisker? Well, if you were going for a traditional Highland style whisky then Glen Garioch is one that you should try; it's all about the creaminess and spiciness - more power than a Spey, but more restraint than the Islands. The two whiskies we tried were from two quite different points in Glen Garioch's history, the 12 from after the '95-'97 mothballing and the '95 the last of the gently peated pre-mothballing era. The 12 is double cask (bourbon/sherry) matured, although the bourbon is by far the largest component, giving it a luscious vanilla nose which is a little deceptive when you get into a surprisingly full-bodied palate brimming with sweet, ripe pear and a hint of toffee. On the finish the spice really kicks in, especially if you are tasting it at its bottled strength of 48% - with a little water the creaminess and fresh fruit is more to the fore. The '95 cask-strength, 100% first-fill American oak was all about that spiciness; white pepper complementing the vanilla-spiced nose, corn and coconut flavours. At 55.3% it's almost scarily palatable even without a drop of water. For me it's the spice that makes these two whiskies. Although there was some peat used pre-mothballing you can see why it was dropped, the whisky doesn't really need that to have plenty of character.

By way of contrast with the Glen Garioch, Gordon then produced a big sherried dram in the form of Auchentoshan 'Three Wood.' This is a personal favourite, one I used to sell lots of back in my Oddbins days, one of my best customers being myself! The Auchentoshan is the last Lowland distillery that is still triple-distilling its spirit, and as a result that spirit is very light, meaning that it will be able to pick up more of the character of the wood it's placed in. It began as a mistake, a whisky that had been in a bourbon cask, then finished in an Oloroso sherry cask was accidentally put into a Pedro-Ximinez sherry cask, but the results were fantastic. It's a mouth-coating, complex, sweet, dessert whisky, jam-packed with golden syrup, toffee, butterscotch and dried fruit. If you're after a whisky to savour after Christmas dinner or with a slice of whisky-fed fruit cake, this has to make the short list. 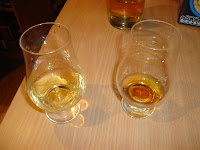 Last up were three expressions from Bowmore, Islay's oldest distillery, in the form of their 12, 15 and 10 year old cask strength whiskies. While the 'big smokies' of Laphroaig, Lagavulin and Ardbeg let loose the power of peat, Bowmore's approach is more about balance. They keep the peating at a regular strength and let the casks have their say too; in the case of the 15 year old 'Darkest' those casks have an awful lot to say - the two I took a picture of were the 10 year old 'Tempest' and the Darkest. You can see what a difference three years in a sherry barrel can make to a whisky's colour! As a double-distilled peaty base spirit it contrasts markedly with the Three Wood, and even with the 12 year old expression being a marriage of American and European oak casks that character really comes through in the smoky nose, accompanied by what I put in my notes as a hint of something medicinal, like unwrapping a fresh bandage. On the palate the briny maritime influence comes through, and on the finish there's a sweet, dairy, almost buttery quality - it's definitely very smooth. The 15 is a different animal, Gordon broke out a plate of dark chocolate and got us to melt some in the mouth to accompany the whisky. It's another rich, after-dinner whisky, the characteristic Islay smokiness almost overpowered by three years in a sherry cask, but like the chocolate it contrasts sweetness with a dry finish. For me this was the revelation of the evening. Often I find peat and sherry to be an ill-fitting partnership, but for me this really worked because the smoke hides behind the richness, only revealing itself in the umami finish. The 10 year old 'Tempest' is a small batch bourbon cask-only dram, each edition coming out in batches of 1,000 cases compared to the 180, 000 a year case output for the 12. This is more conventionally Islay, the relative youth and cask-strength allowing the peat to shine. It's vibrant and citrussy, with characteristic saltiness and pepper in the finish.
Thank you very much to Morrison Bowmore, and in particular to Gordon for an excellent and informative evening.
Posted by Gareth at 11:23