At the instigation of Phil of Beersay fame, and because I don't have any Temptation for Friday's Durham Brewery promoted '#impoff' (Imperial Stout Twitter tasting) I ended up drinking a Nøgne Ø Imperial Stout yesterday evening. 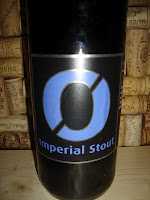 It pours with a gorgeous deep tan head which retained well as I drank the beer. There's dark chocolate, a faint soapiness and a slight lactic/milky coffee note to the nose. On the palate it's both dry and rich, with lots more coffee, bitter cherry and pine hop flavour. It holds the alcohol well, not spirity. (Possibly dangerous that!) Good balance with the chocolate & touch of vanilla. Coffee keeps coming as you drink it, along with more spicy notes. On the whole a fine beer. It's not overly exciting, but certainly impeccably made. Sometimes it's easy to get carried away with the power of some modern beers when you're tasting them but for me they have to have a corresponding amount of character to back up high abv. I'm just not sure this needed to be 9%.


On poking round the website it was interesting to see that Nøgne Ø don't appear to brew a 'non-imperial' stout and I wonder if they could get a similar amount of character into one without the abv. It was a flippant comment at the time but I mentioned to a couple of people on Twitter that it could maybe have done with some time in an old PX sherry/whisky butt to add character, and given the guys at Nøgne Ø have aged a similar beer in Cognac barrels, it suggests I might not be alone in that thought - this I'd love to have tried.