Hops In A Bottle

I took a mate up to Mansfield the other day for a visit to a beer shop I'd not been to before. I first heard about it on Twitter just before Christmas, which I think was not long after it opened.

Hops in a Bottle's focus is very much on local beers. There's a small selection of Wychwood and the like from outside of the surrounding area, but they seem to be more to provide something familiar for the less adventurous than a core of what the shop is about. Similarly don't go in expecting a selection of trendy American craft beers, or indeed anything foreign, or you'll be disappointed. That is in no way a criticism, the shop seems proudly local, and the beer range simply reflects that. The policy seems to be to stock as much of the range as possible from the breweries too. Welbeck Abbey Brewery (who also have a blog) is the closest to the shop, with breweries such as Blue Monkey, Nottingham Brewery, Flipside and Castle Rock from down here in Nottingham. Derbyshire's represented by Brampton, Buxton, Spire, Peak Ales and Thornbridge. Lincolnshire and Yorkshire in the form of Sleaford, Springhead, Wold Top and Kelham Island. I also caught sight of Newark's Milestone brewery. I apologise for any I missed, no notebooks were harmed in the writing of this blog post. I think that's a pretty extensive range when you factor in how many lines each brewery provides, and all of this traditional beer is set out in a very modern way. It was refreshing to see the temptation for decking the shop out in all sorts of mock 'Olde Worlde' rubbish was resisted. As you might be able to see from the photos, when we have our scorching summer (surely we're due one?) they might need to protect some of those precious bottles from the sun, but it's nothing a blind won't sort out. 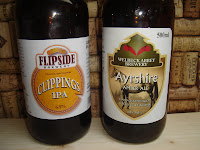 Here's a brief tasting note for a couple of the beers I picked up:

Hops in a Bottle's website is still under construction, but you can say hello on Twitter, or even better, go and have a chat in person - allow some of that enthusiasm for a locally produced product to inspire you!
Posted by Gareth at 09:13