I've had a brief break from blogging, mainly because I've had a lot on, and much of my time has been spent reading about spirits - not something I'd imagine most readers of beer blogs are interested in.

Today, it's budget day. Tax on beer will go up. A tiny number of people have signed the petition against beer duty escalation, and Camra have come under criticism for not urging their members to sign it. In a way this is understandable - their members, I think, should be urged to sign it. In the end though it's a large and (as far as I can see) democratic organisation, and by its very nature is therefore unlikely to do something quickly enough to be effective. Still, maybe a pointer towards the fact that it is there, suggesting to members that they make up their own mind about whether the government should be supported in doing this? I'd suggest silence from beer's largest consumer group on the issue could be construed as tacit consent. 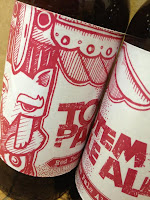 Locally, BrewDog Nottingham seem to be going strong, presumably because it is 'The only destination for real beer in Nottingham!' which means the pint I had in the Lincolnshire Poacher the other night must have been a figment of my imagination. Bastards. £2.60 for a glorified dream. BrewDog are going ahead with Totem 'Red Indian' Pale Ale. I was rather surprised a company who go so far as to use 'flavor' on their website and 'draft' on their chalkboards are so clueless about culture across the pond that they don't know 'Red Indian' isn't exactly politically correct. Maybe we should be glad it's not a dark beer they're releasing with an accompanying racial slur as a name. Nottingham's criminal reputation doesn't need any enhancement from scenester-induced race rioting after all.

Anyway, proper blog to return very soon. I'm off to check out Hops in a Bottle in Mansfield today before the prices go up, and hopefully get to write about some nice beer!