It could be I'm missing the point somewhere, but it strikes me that in some cases the whole 'hop flavour is good' thing gets pushed so far as to leave a beer that actually has very little character or complexity. Yes, it's undeniably packed with flavour, but it can be one-dimensional, even (dare I say it?) boring. Hops and nothing else.

There is precedent. Twenty years ago varietal Chardonnay was almost synonymous with white wine. Liberal use of new oak was fashionable, and when this had been followed through to its logical conclusion we ended up with white wines that had no fruit character. Wines were flavoured more with oak chips or even oak extract than the grapes they were fermented from in the first place. It was more like biting the twigs than enjoying the fruit. 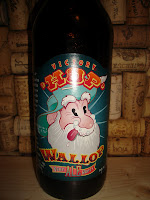 That said, experimentation is a great thing, and without creativity we'd be without an awful lot of very good beer. Would Sabbath be around if Hendrix hadn't been? Slayer without Sabbath? Napalm Death without Slayer? Anaal Nathrakh without Napalm? OK, it's stretching the analogy, but my point is that, while you might well not get on with music, or beer, that pushes the margins that bit further, it's still a good thing that it exists. As the ever-motivational Olympic motto goes: 'Bigger, faster, more expensive...' (or possibly not.)

Me? I'm undecided on the whole Imperial IPA thing. I love the hop flavours but it's the lack of interest that bothers me. Yes, there's loads of pine on the nose and grapefruit pithyness on the palate of this Hop Wallop, but it almost tastes a bit extracted, sort of wrung out rather than loved! I don't find myself dwelling on it, savouring the beer while enjoying discovering new flavours as it warms. It'd stand out in a crowd and I'm sure at a beer festival or if you were judging it as part of a big line up it's attract your attention, but does that necessarily make it a great beer?