Possibly a bit excessive on the grandiose title, but I like alliteration, and putting 'Burton Bridge and Sierra Nevada Porter' in the title line would have been far too long.

One of the fun things about tastings of whatever tipple is trying to challenge preconceptions. Blind tastings are particularly good for this, and the greater the preconception, the better it works, be it 'I don't like Chardonnay' or 'lager is all tasteless fizzy rubbish.' Although I didn't try these two beers blind (my wife did, as a spurious, unscientific control group of her own), I have to admit to a couple of ideas as to what differences there might be between them. 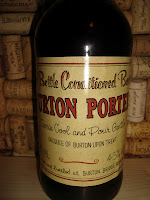 The Burton Bridge is black, but shows deep reddish brown/garnet colours when you get some light through it. There's a fruity aroma but without heavy alcohol sweetness. I though there were aromas like the skins of plums (fruity, but bitter), the wife chipped in with cherry.  On the palate the bitter chocolate and roasted coffee notes cam through a bit more, along with a touch of mixed peel. The finish is clean and decidedly bitter - and this becomes more ferocious as you get down to the bottom of the bottle (it's bottle conditioned). 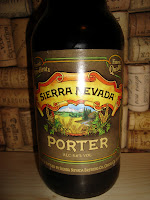 The Sierra Nevada unsurprisingly is more aggressively fizzy, and with a lot more chocolate on the palate, and less fruit character. It's certainly a less challenging beer, that sweetness and a bit more headiness from the higher abv making it more approachable, but I thought it lacked a bit of complexity compared to the Burton Bridge. Having said that I thought they were both good beers, and a lot more similar than I expected them to be. If you want a porter to be mellowing and not shouty and aggressive then they do the job. The missus preferred the Sierra Nevada, so I think an honourable score draw is a fair result.