Mortlach 16: Goodbye to an Old Friend 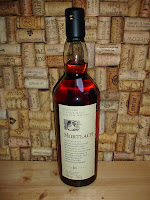 Back in the days when I was first discovering my own tastes in whisky beyond 'I like whisky', Mortlach 'Flora & Fauna' 16 was a revelation to me. It's one of the first whiskies I tried that really stuck in the mind as identifying a distinct style that I preferred - full-bodied, rich, sherry cask aged - and I've always gone back to the sherry monsters when given half a chance. However, continued rumours about the demise of the Flora & Fauna range have proved to be true, at least for this one, and so it's a fond farewell to this particular expression in the form of a a re-visit, perhaps for the last time.

It's a deep mahogany dram. Unsurprisingly there's lots of sherry on the nose, and there's a hint of sulphur to it too, something that's often divisive but I like it. It reminds me of Worthington White Shield and I think it complements the light smoky notes well. On the palate it starts gently; juicy sultanas coming in first, then making way for more spicy notes, with the sulphur coming through as a burnt toast and a mineral, firework taste. The finish is long and woody flitting between pepper, pencils and ginger cake. Overall a fabulously complex, primal whisky. I just hope that those in charge of these things don't feel that it's time to tame the 'Beast of Speyside' because if there isn't to be another bust cycle for whisky then I hope those with a point of difference to the greater majority can survive and not end up closed or homogenised.

If you see any of this about at a reasonable price, grab it while it's still reasonable. If you're looking for a good alternative then the Blair Athol 12 is still around, as are some big sherry-influenced drams from the likes of Glenfarclas, Glendronach and Aberlour.

If Ian Buxton is right, and the 'entry level', non age-statement expression of the new Mortlach range is pitched at a similar price level to Johnnie Walker Platinum, a good 50% more than most were selling the 16 for, then I don't think I'll be buying it until I've had a chance to give it a try it and be convinced. I'd certainly jump at the chance to get to a Mortlach tasting though, and given they've appointed a specific brand ambassador in Georgie Bell then with a bit of luck that will be on the cards. I have tried some great whiskies recently without an an age statement - notably Morrison Bowmore's newish Auchentoshan and Glen Garioch virgin oak aged expressions - but I can't really see why a regular, NAS whisky would command such a hefty price tag. I suppose it remains to be seen if it's worth it, but, while I like it, I don't think Talisker Storm is worth the jump up in price from the regular 10yo, or indeed the Johnnie Walker Double Black from the regular 12. We'll have to wait and see.