It's a bitter-sweet moment waving goodbye to a bottle of whisky. Having a bit of a tendency to horde these things it's great to think I can grab myself another bottle (although I probably already have) to replace it, but also sad to bid farewell to a whisky I've really enjoyed. 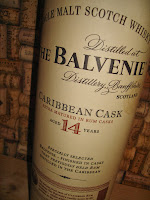 Balvenie is a whisky that seems to take really well to the more unusual barrel finishes, I was lucky enough to try the 21 year old Portwood at the Kean's Head a while back and it's sublime, and this is great too.There's almonds and marzipan on the nose, then it's all about that luscious sweetness on the palate, although there's just enough bite to remind you that you are drinking a pretty serious whisky in amongst all the comforting barley sugar. There's a sweet spiciness to the finish - like honeyed ginger if such a thing exists. Much as I love a sherried dram this was great to have just as a bit of a change.

Distillers are rather protective of the wood they use for their precious spirit. Apparently these casks are seasoned with rum they've tankered in to make sure they can keep an eye on what it's doing to the wood, rather than buying wood that has previously had rum contact. The care taken really shows.

Next up for the cupboard is the 17 year old doublewood. Yes, I've already filled the gap. The king is dead and all that.
Posted by Gareth at 21:01