I'm in the process of putting together a series of posts about whiskies and wine casks. It's a nice little bit of revision for me, particularly since my fortified wine diploma exam seems like a lifetime ago now! Rather than straight tasting notes on whiskies I'm going to talk a little bit about whisky casks' previous inhabitants, the wines whose character will bring about a change in the whisky's personality, and see if I can detect how the wine has affected the whisky in some examples.

Pedro Ximénez sherry is another great example of the vinificational ingenuity that has been shown in the sherry region in terms of making a wine that withstands the effects of time. Rather like the Oloroso I covered previously, oxidation is embraced, despite it being a more conventional winemaker's enemy. Pedro Ximénez is a grape variety that lends its name to a type of wine, although it's far more than a simple varietal wine. Once picked the late-harvested the grapes are laid out on grass mats to dry for 7-15 days in the searing southern Spanish heat; the soleo or pacificación process. This concentrates the grape juice, increases the sugar levels and ups the potential alcohol that the must can achieve once fermented - in practice this means that there will be a lot of sweetness left after the wine is fortified.

Pedro Ximénez is a favourite of mine, something I always pick up for accompanying Christmas pudding - delicious and decadent.


Pedro Ximénez: This dark, ebony coloured wine, with its pronounced tearing, looks stcky and dense. It has [a] very rich sensual bouquet in which sweet dried fruit notes (raisin, figs and dates) predominate, accompanied by aromas of honey, grape syrup, jam and candied fruits, with toasted (coffee, dark chocolate and cocoa) and liquorice notes accentuating as it gets older. Velvety and sticky on the palate, with enough acidity to mitigate its alcoholic glow, it has a very long finish that encourages the drinker to take another sip.15-22% abv, 180-500 g/l sugar.1

Lagavulin 16 and Lagavulin Distiller's Edition: Lagavulin is a whisky that stands on its own. The big broad stills, wide cut (72-59%) and lack of copper contact result in a rich, full-bodied whisky, contrasting with the lightness of Diageo's other Islay distillery; Caol Ila, and indeed with its other Islay bretheren. The 16 year old expression is one of Diageo's 'Classic Malts,' and as such has a Distiller's Edition as its companion. Some of the regular (mainly second-fill bourbon) sixteen year old is transferred into a Pedro Ximénez cask for a few months. Don't, however, be fooled into thinking that short extra maturation can't have an effect on quite an old and powerful whisky; this is Pedro Ximénez, and it's rarely shy. On the nose the 16 is classic Islay; peat, iodine and smoke but with more fresh bonfire robustness than others. On the palate it is spicy and mellow, a lovely relaxing armchair of a whisky. The PX influence on the Distiller's Edition possibly makes it even more so. For me Lagavulin is about the mellow smoke and richness, and this is why I think the extra sweetness, coffee and dried fruit flavours make it all the more luxurious and juicy for me, like the difference between a fruit cake and a Christmas cake. Not hugely different, but the difference is crucial, and delicious. The Distiller's Edition is one I've mentioned before when I had it at a Burn's Night Tasting if you want some further musings. It's always interesting to go back to these whiskies, especially to compare them to others in the range. 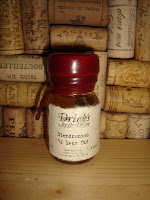 Glendronach 12: Glendronach is without doubt one of my favourite distilleries. I can see why some wouldn't be such big fans - the use of sherry casks is hardly subtle. That's the great thing about Single Malt whisky though, there's so much room for so much whisky that this sort of thing can be enjoyed, or ignored. Since they're owned by the same folk that own Benriach I think they can cater to all tastes anyway! This expression starts off in Oloroso sherry barrels than moves to PX, so you wouldn't go into it thinking that the sherry's going to be hiding in the background. As Billy Walker, managing director of Glendronach says '...with Pedro Ximénez you've gone to the next sherry level, if you like.'2 Don't say you weren't warned! On the nose the Glendronach 12 has aromas of brandy-soaked sultanas and toffee. On the palate it's seriously smooth, with a marzipan sweetness that moves pleasantly into a drier, nutty finish. This is described as 'The Original' Glendronach and so there's nothing really to compare it too, but it wears its sherry influence across more than just its sleeve. One further note, Glendronach have just brought out a new expression, so maybe one day this particular Glendronach will come my way... I can but dream.

Another PX influenced whisky that's well worth trying is Auchentoshan's 'Three Wood' - another delicious marriage of sherry casks resulting in a glorious dessert whisky. Quite similar to Pedro Ximénez are Moscatel wines. They are made in a similar way to Pedro Ximénez wines but from the Muscat grape variety. Casks that have previously housed Moscatel are used to ace Caol Ila Distiller's edition.

Next post, another fortified wine that's become the victim of going somewhat out of fashion... Port.

Pedro Ximénez sherry image taken from, and reproduced with the permission of, the Consejo Regulador Jerez website all about sherry. Well worth an explore.

1. Various Authors. The Big Book of Sherry. Regional Ministry of Agriculture and Fisheries, Department of Publications and Dissemination. ↩
2. Roscrow, D (Ed.). 1001 Whiskies You Must Try Before You Die. London: Quintessence, 2012. ↩
Posted by Gareth at 16:08