This isn't a fair review. I ordered these beers back in May and they went out of date a couple of weeks ago. It seems that years of pub management has started to remove itself from my subconscious, and basics such as stock rotation are now escaping me. I blame the wine and the whisky... No dates of course, not because I've drank too much of either... Ahem.

Summer Wine Brewery are a brewery I've been chatting to (well, James at least) on Twitter for ages, along with reading their blog, without ever actually getting round to trying their beers. Probably a bit rude of me really but they seem like nice enough guys so hopefully I'll be forgiven!

So here they are, a brace of slightly out of date beers, which like I said means that a proper review isn't really fair, so feel free to ignore it. But of course there's a but... 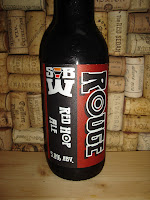 First up was the lovely looking cherry-red 'Rouge,' described as a Red Hop Ale. There's loads of big hops on the nose, lots of toffee-apple and pine resin. On the palate it is bitter, and if the bitterness has been diminished because it's a couple of weeks out of date then it might well take your head off when it's in its prime! Lots of grapefruit pith but with an elegant finish that doesn't scrape your tongue, rather leaving you wanting more. 5.8%, £2.70 for a 33cl bottle. 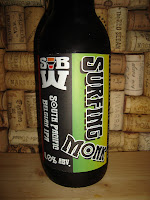 The curiously named 'Surfing Monk' was next. A 'South Pacific Belgian IPA.' I was tempted by the sound of Kiwi hops with a Belgian twist... It poured a pale amber, and promised a little less on the nose than the Rouge. It was lighter in body, and more citrussy than the Rouge too, balanced nicely between all that lemon and grapefruit pithyness and the spicy, yeasty 'Belgian' angle. A terrific beer, big hops but with complexity too. 6% abv, £3.15 (33cl)

Funnily enough, the one I had while it was in-date was my least favourite, the Barista Espresso Stout. Don't get me wrong, it was good, but not outstanding like the other two. Next time I'll be checking the dates, because if this is what they're like when they're past their best I can't wait to try them when they're in their prime!

NB: Prices quoted are from Ales by Mail.

Edit: I've just remembered that Ade from Summer Wine is on Twitter too.