This one was a bit if a blast from the past. Nearly ten years ago my wife and I were drinking this beer on our first date, although it was the regular blond rather than this darker (formerly just a winter) version. It's one of the beers from the Brasserie Lefebvre stable, we used to sell their Floreffe back in my pub days too. 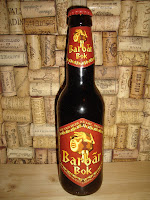 It pours a deep brown colour, and I got less honey on the nose than I remember getting from its paler cousin. There's a load of dark and dried fruit in there; along with rich spices - it has a certain mulled quality on the nose. On the palate I got more of those wintery flavours; mixed peel and demerara sugar and characteristic yeasty Belgian dustiness. Overall the 2.5% honey is a contributory part rather than being at the forefront, it adds to the whole warming winter brew feel, and while I can see it wouldn't be to everyone's taste, we enjoyed sharing a bottle.