The first of my 'barrel aged' beers, for trying to get my head round oak and its influence on beer, isn't barrel aged at all, but it is from the UK's only brewery that is still using unlined oak barrels to ferment their beer in - the Traquair House Brewery up in Scotland. In the wine world this technique is sometimes used for white wines, as an easily controllable way of imparting oak character, and less frequently as a way of 'finishing' partially fermented reds (after the removal of all the skins etc.) to soften the wine. 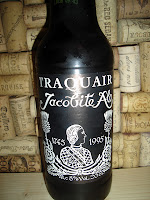 The beer pours an almost black deep brown, the brown showing when you hold it up to the light. There's a tan coloured head which deteriorated rapidly. The aroma is dominated by malt; treacle and molasses. On the palate the beer is noticeably heady and quite sweet. It's full bodied, almost to the point where it feels chewy and sticky, with intense chocolate flavours. The treacle also returns on the palate, along with buttered malt loaf and black forest gâteau (hat-tip to my wife for that one!) The finish is sweet, and mellow.

In terms of the oak effect it's difficult to say. According to the label there are spices added, and it's also a very big, robust beer. The website says some of the barrels are two hundred years old, and I'd suggest that at that age, while they're not artificially lined, use has almost resulted in a lining of its own. There are flavours of vanilla in the beer, but since that's a spice it's impossible to tell if that's added or from the wood.  I would suggest that the beer has been mellowed out by the wood contact though, allowing it to carry its 8% abv a bit better, and the toast flavours do seem to complement and enhance those primary malt flavours.