I've had to put my oak exploration beers on hold for a few days. I'm full of cold and I wanted to do it properly - if you can't use your nose you can't taste anything, it is after all 'the most acute human tasting instrument.' * 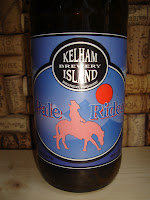 I do have a beer to write up though, while I'm waiting for my olfactory receptor cells to recover and reading about Nobel prize winners.  I had a bottle of an old favourite of mine, Kelham Island Pale Rider, last week. A mate of mine used to run the New Barrack Tavern in Sheffield, and this is a beer I fell in love with on returning from a year of fizzy lager (with some rare but very notable exceptions) in Australia. Going back to beers you have a nostalgic fondness for is always dangerous, but I didn't have the expectation levels I would if I'd seen it on draught (which would probably lead to pant-wetting levels of excitement), and so I thought I was pretty safe.

In the end I suppose I was right, it's simply not the beer I remember it being on tap. However it's got a decent hoppy bite that grabs the side of the tongue, a good fruity complexity, showing lemon sherbet and a touch of soapiness in the mid-palate, all polished off with a moreish bitter finish.

It's still a good beer, one I'd be only too happy to drink again, and aside from the shift from draught to bottle, I can't help wonder how much my perception of it has shifted in the interim years while I've been refining my taste buds. (I know that sound horribly pretentious but I have sat an awful lot of wine exams since I used to drink in the NBT - and I'll concede it could be I've just been getting older and more picky!)

* The Oxford Companion to Wine
Posted by Gareth at 12:44