My first contribution to The Session (#57)

I had to have a think about this one. I grew up in Yorkshire, where obviously all the beer was perfect (hmm). It wasn't until I went of to University that I got my first exposure to indifferent beer – and then that weird fizzy stuff which, I had to have explained to me, was lager. 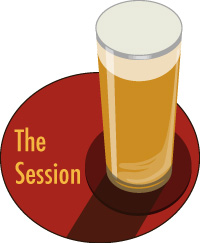 It occurred to me to think about the guilty pleasure side of things. When I worked down in a London Oddbins which was next to a video shop, we used to try and match wines or beers with films, so I think what I'm asking is what is the ideal beer to go with the kind of film you might flake out of concentration (and probably consciousness) in front of, an accompaniment to the cerebral level required to fully absorb the delicate nuances of a mid-nineties Jerry Bruckheimer blockbuster.* The film you rent to watch with some friends, that you're probably going to talk across rather than actually watch.
The great thing about great beer or a deep, complex wine is that it encourages thought, reflection and deliberation. However, if at all times you are analysing or deliberating and, almost by default, ignoring everything else life has to offer, then you are missing what it really does best, which is enhancing life. Even us beer geeks should sometimes ignore the beer, ignore what's playing on the idiot box, and enjoy the company we're in.
Recommendations? Polskie piwo dobre – 'nuff said (that's the limit of my Polish, and even then it's probably wrong!)

* For the record, it was Pirates of the Caribbean which stopped this sort of thing. Un-watchable no matter how many beers I'd had.

The Session #57 is hosted by Steve at Beers I've Known
Posted by Gareth at 10:03

Email ThisBlogThis!Share to TwitterShare to FacebookShare to Pinterest
Labels: #57, Lager, Poland, The Session